Much like fingerprints, adventures are unique and one of a kind. They are experiences to be enjoyed, interpreted and remembered differently from one person to the next. We take our own previous experiences, emotions and attitudes into the wild and form new ones. This gives each of us a different reality for the same adventure.

My recent revisit of Alaska was no exception to this phenomenon. Although I had visited the same areas last year, this trip was drastically different and, in many ways, better. Nearly all of the characters of this story are the same from last year, but the vibe and stoke were quite different. More chill, more adventurous, more amazing.

John Muir, the famous naturalist, wrote in his journal that you should never go to Alaska as a young man because you’ll never be satisfied with any other place as long as you live. And there’s a lot of truth to that.
~ Tom Bodett

I spent the first part of my trip supporting James Scott, three-time Arctic Man champ, at the 31st Annual Arctic Man Classic. The weather wreaked havoc on the event, and James and I made a few free fall and wingsuit jumps into an approaching snowstorm. If you don’t like the weather in Alaska, wait five minutes. That’s about how long it took for the storm to appear and hit.

Safely on the ground, our ground crew of friends scooped us up on snow machines, and it was back to focusing on the race for James. In the end, after a two-day weather delay, James – and about a quarter of the men’s field – was knocked out of the race, literally. Several of the racers were sent to the hospital for concussions and broken appendages. While I had already opted not to run the race this year, the extreme conditions made my participation in last year’s event all the more real.

With the race behind us and the Chugach ahead of us, we changed our focus to skiing, speed riding and good times with great friends. Thompson Pass (about 45 minutes north of Valdez, in the heart of the world famous Chugach Mountains) was our home and base camp for the next two weeks. The forecast called for calm winds and blue skies almost every day for 10 days. It’s always nice when you roll into camp and see this in the forecast. It’s even better when you learn that everyone who had been there for the last two weeks had dealt with gray, doom and gloom.

The snow pack was much better compared to last year, thanks to el Niño. But the temperatures were also a bit warmer in the Chugach and eastern Alaska mountain ranges. There were three avalanche-related deaths during our time in Alaska. The unusually warm weather, high level of sunshine and heat radiation made the snow pack extremely unstable. Every day we spent in the mountains, we witnessed or avoided slides.

After a few days playing in the mountains on snow machines, skiing and speed riding, our buddy Clyde Hewitt asked us if we wanted to go down the rabbit hole. Slightly perplexed, a little intrigued and a lot scared, we inquired what he meant. Clyde explained that the rabbit hole is what he calls an ice cave at the tongue of the Worthington Glacier. I was pretty apprehensive, but when Clyde said everything would be fine “because we had a rope,” my apprehension turned to anxiety.

Now, if you don’t already know, I have a pretty severe fear of heights and a healthy fear of tight places. Both come from my need for control and both cause me great distress. While I had hopes that this would be one of those large, wide open, walk-in style caves, all hopes went out the window when we pulled up to the “hole.”

As we tied the rope off to one of the snow machines, I came to the realization that this might not go well for me. The rabbit hole was about 20+ feet down and a tight fit with at least 50-75+ feet of ice above.

After everyone else had gone down, I got about a fourth of the way in, and things got really tight. I stopped, took several breaths and called out that I wasn’t too sure about things. After what seemed like at least 10 minutes (but was probably more like 10 seconds), I got up the nerve to “think small” and slide my way down the ice hole and to the bottom of the cave.

To this day I still do not have the proper words to describe the feeling and the view from inside this cave. There was exposed rock with massive marks (scars) from where rock and ice had scraped up against it for millennia. There were large fissures and millions of tiny air bubbles inside the clear, blue ice.

I use the term ice very loosely because this isn’t the ice you make in your freezer. This ice, despite all of the tiny air bubbles, is incredibly dense from all of the pressure exerted upon it from the snow and ice above it. The best way to describe it is to think of how diamonds are formed by the incredible pressure and unimaginably long amount of time placed upon a piece of coal. But while diamonds can be artificially made in science labs, these glaciers cannot.

After looking around in awe and conversing about how amazing this was, we decided to head back to camp, but this experience is one I will carry with me for the rest of my life. I felt so small and so insignificant in that cave.

I spent the next several days with some of the most amazing, fun spirited friends a person could ask for. Each brought a different skill set, level of enthusiasm and threshold for adventure.

Our friend MoAnna Bradshaw is probably one of the most ripping snow machine riders you’ll ever meet. Her boyfriend Clyde Hewitt is an incredibly talented photographer (his photos are featured in this blog) and equally awesome on a snow machine. James Scott is the guy you can’t help but love but hate to be around because he is so ridiculously good at everything he does. Our buddy Justin Boer is a paragliding and speed riding instructor and guru who, despite having a peripheral spinal cord injury, is one of the sickest pilots around. Nick Dynes is James’ coworker, a Fairbanks native and a rookie speed riding pilot. All around, we made a pretty rad crew!

Together, we traveled over 200 miles on snow machines, across dozens of glaciers, and up and down several hundred thousand feet of vertical. We skied and went speed riding down steep pow runs and cascading ice falls, sometimes narrowly missing or flying over crevasses that could have swallowed us whole.

At times, it was hard to fully comprehend what we were doing and where we were. It seemed that no matter how much we flew next to, off of and over massive seracs or traveled up and down the massive glaciers that disappeared on the horizon, we would never see it all. Through every pass and around every corner, more mountains and more glaciers waited. One glacier met and merged into another and another and another.

As if all this weren’t enough, on one of our last adventures, we went to a zone known as Abercrombie. It took us about 5 glaciers and three passes to reach it, but once there and on top, we could see all the way past the termination of the Valdez Glacier into Prince William Sound to the South, past The Books to the East, and to the rest of Alaska to the Northwest. We were on top of the world.

Once again, I felt incredibly small and insignificant. We had traveled nearly 30 miles across half a dozen glaciers, each of which were hundreds if not a thousand of feel deep and some over a mile wide. We were nothing but a speck on the map; yet we can cause so much damage to this wonderful and wondrous place.

I’d been on top and below these glaciers and seen their incredible size and power. But no matter how large and powerful they are, they are still no match for the devastating power of man and our devices. It’s this recurring thought that keeps me appreciating the moments I spend in the mountains with my friends and family. It helps me appreciate those steep and deep pow days and blurry fast speed riding runs so much more.

As the remaining days of my trip dwindled, we linked up with two amazing friends and long time ski guides in both the Chugach and Argentina Andes, Sunny and Mike Hamilton. Just winding down their heli-ski season, Sunny and Mike were nice enough to drag us around the Odyssey and Diamond Zones of Thompson Pass.

It’s incredible what over a decade of guiding in a region can do when it comes to knowledge. These two know every nook and cranny, every peak name and every route to, from and around a pass, peak, couloir and bowl. Sunny was usually leading the charge while Mike and the rest of us followed in amazement and wonder.

Our final days culminated in a few runs where Mike and Sunny skied their way down a glacial snowfield while James and I flew next to and over them. It’s pretty awesome when you can combine different disciplines and have them come together in beaming smiles and repeated high fives.

As my fun filled days in Alaska came to an end, it seemed as if winter too was coming to an end. The Worthington Lot was now void of snow, and the faint sound of rivers flowing was growing a bit louder.

Life was put into perspective as I stood above and below the surface of a living, moving block of ice born ages ago and living for millennia. While it probably raised many more questions than it answered for me, for at least a few moments, I came to understand a part of what life is about: Sharing moments with each other, appreciating those moments and those individuals, and doing our part to ensure that we are able to continue sharing those moments with each other. 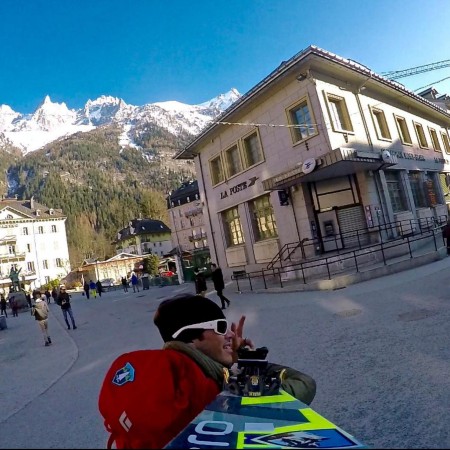