One of the oldest national parks in Southeast Europe and Croatia’s largest, Plitvice Lakes National Park is a must-see for anyone visiting Croatia. Some eschew it as tourist trap packed with tour groups wielding selfie sticks. After experiencing the undeniably unique nature of the park firsthand, I’d argue any traveler would be woefully remiss to pass over Plitvice. The park is also incredibly kid-friendly, and our young daughters (5 & 7) rank it as one of their favorite activities from our summer vacation.

Known for a chain of 16 terraced lakes joined by ever changing waterfalls, the ethereal features of Plitvice National Park are the result of karst topography. Over thousands of years, water flowing through Croatia’s canyons dissolves the rock and deposits travertine, a special type of limestone that settles and sticks to everything in the water like a silver cloak. These barriers create natural dams which in turn produce a series of stunning lakes, caves and waterfalls. Still at work today, these geological processes constantly change the park’s landscape and are the reason Plitvice was designated a UNESCO World Heritage site in 1979.

It’s hard to find the words to do Plitvice justice. My husband and I have hiked some of North America’s most beautiful trails. From the understated beauty of the Southern Appalachian Mountains to the Knife’s Edge of Katahdin. From Zion to Bryce, Yosemite to Glacier, and across the border to Waterton, Banff and Jasper, we’ve logged miles and forged unforgettable memories. But the geography of Plitvice was unlike anything we’d ever experienced.

After flying into Zagreb, we headed to Plitvice Lakes National Park on our first full day in Croatia. We drove through rolling countryside until the forest thickened and a canyon appeared in the trees, seemingly conjured out of thin air. We’d reached the park’s border.

Plitvice has two entrances. Entrance 1 provides access to the four lower lakes and the stunning Veliki Slap, the park’s 78 m (255 ft) waterfall; entrance 2 leads to the 12 upper lakes. Electric boats connect the upper and lower lakes, and ferry service is included in the price of admission.

18 kilometers (~ 11 miles) of wooden boardwalks and hiking trails wind around and across the lakes, taking you over translucent waters that alternate between roaring cascades and calm pools. You can easily spend a whole day exploring the park; you can also shorten your day and still cover the park’s highlights.

After passing the overflowing tour buses and teeming crowds at Entrance 1, we opted to park and start at Entrance 2. From the parking lot and ticket stand, it’s a short walk through the woods to the shore of Kozjak, the park’s largest lake and the link between the upper and lower lakes. We took a short boat ride to the upper lakes trail head. Immediately, Plitvice revealed her splendor, and we saw waterfalls pouring into the crystalline lake.

Here, the trail is one-way to control the flow of traffic. More ambitious hikers can meander for miles and explore all of the upper lakes, but we opted to hike the bottom loop only. We were not disappointed. The lakes spilled through the forest, pouring around the trees in ways that defied convention.

We followed the boardwalk in front of the Wall of Waterfalls, thunderstruck by the sheer beauty surrounding us. Our daughters, who stood speechless at the foot of glaciers in the Canadian Rockies, couldn’t stop chattering excitedly about the spectacle before their eyes.

We returned to the trail head and took the 20-minute ferry to the lower lakes. The boat ride was the perfect opportunity to catch our breath and calm our senses before round two. Just beyond the dock there’s an open field filled with picnic tables and surrounded by park facilities. Before continuing our hike, we filled our water bottles, and the girls devoured ice cream cones.

While the upper lakes seemingly sprang from the forest floor, the lower lakes poured through a limestone canyon whose cliffs tower 20-40 meters (65-130 feet) above. In places, the boardwalk hugged the cliff walls and lake’s edge. In others, the path crossed the lakes, and the water passed just below your feet. A side trail split off to deep caves carved over time.

After following the edge of the first two lower lakes, the boardwalk crossed between lakes and skirted the cliff wall. A waterfall rushed below our feet and poured into the lake far below. We took the side trail to reach the base of Veliki Slap, Croatia’s highest waterfall.

Continuing beyond the falls, we climbed the trail for outstanding views of Veliki and the lakes below.

At the top, the trail met a forest road. You can follow the road to another overlook point, or you can take the trail through the forest and above the lakes before descending to the boat dock. We returned the way we came to the base of the falls. We reconnected with the main trail which eventually climbs to the trail head at Entrance 1. Looking back, we had a spectacular view of Veliki Slap and the trail crossing over another waterfall. When we reached Entrance 1, we bought drinks before walking to the shuttle station to take the bus back to Entrance 2.

Plitvice Lakes National Park was our first experience in Croatia, and it set the bar for the rest of our trip. After leaving the park, we headed to the coastal city of Zadar and then continued to the Makarska Riveria to spend the remainder of our trip on the coast. The pebble beaches and luminous waters of the Adriatic Sea far exceeded our expectations, but Plitvice holds a place in our hearts all its own. 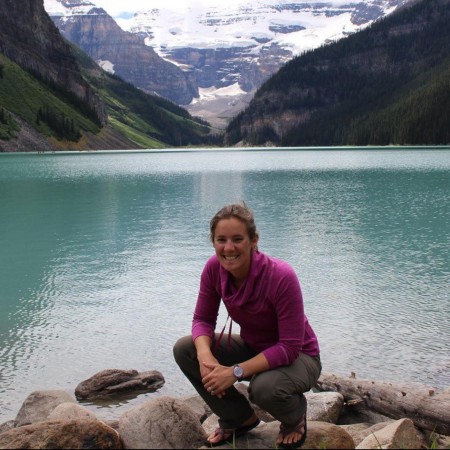